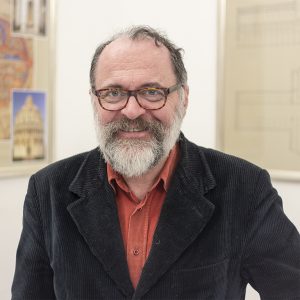 Valerio Ascani (Lucca 1962) graduated in History of medieval art at the “La Sapienza” University of Rome with Angiola Maria Romanini and Antonio Cadei. After attending the School of Specialization in Art History of the same university, he obtained the title of PhD with a study on the history of architectural design in Italy in the Middle Ages. He has been teaching at the University of Pisa since 1999, where he teaches History of Medieval Art in the master’s degree courses in Art History and Archeology and at the School of Specialization in Art History, and is vice-president of the Course of master’s degree in history and form of visual arts, entertainment and new media from the same university. He is the author of over a hundred scientific publications on the Italian and European artistic Middle Ages, in particular on Romanesque and Gothic architecture and sculpture, and for fifteen years he was editor and author of the Encyclopedia of Medieval Art of the Institute of the Italian Encyclopedia founded by Giovanni Treccani. He has participated in numerous international conferences and worked as a lecturer at Italian and foreign universities and academies. He is a member of scientific committees and of the main associations of scholars in the sector at an Italian and international level. His most recent fields of interest include the modalities and consequences of remote artistic relationships between different regions of the European Middle Ages, in particular between the eleventh and thirteenth centuries. Since 1990 he has been carrying out a complete research on Lombard-Ticino artists in Tuscany and Trentino in the thirteenth century. His monographic works include: “The fourteenth century drawn. The design bases of Gothic architecture in Italy “(Rome, Viella, 1997),” The National Picture Gallery of Siena “(Rome, State Printing Office, 1997),” The Leaning Tower of Pisa. Concept and realization of a Medieval masterpiece “(Pisa, ETS, 2015) and, with Goffredo Viti and Antonio Cadei,” Monks in arms. The sacred architecture of the Templars across the Mediterranean “(Florence, Center for Medieval Studies of the Charterhouse, 1995), with Mauro Ronzani,” The leaning tower. History and interpretation of the Bell Tower of the Cathedral of Pisa “(Pisa, ETS, 2011). Finally, he dedicated his new monograph to the Lombard-Ticino masters: “The Masters of Arogno. Architects and sculptors of the thirteenth century from Tuscany to the Alps” (Lugano, Fontana edizioni, 2019).